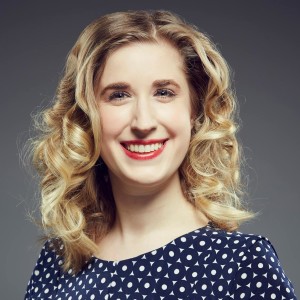 Laura Anne Harris is a writer/performer/director, born and raised in Victoria, B.C. Laura trained at the University of Victoria’s Acting program and graduated in 2007.

Laura wrote and starred in Pitch Blonde at the 2007 Victoria Fringe Festival where she won the 2007 Critic’s Choice Award for ‘Best Fringe Production.’ Pitch Blonde chronicles actor Judy Holliday’s testimony during Senator Joseph McCarthy’s inquisitions. Since then she has performed this production to a sold-out run at the 2008 Uno Festival in Victoria, B.C., the Sunset Theatre (Wells, B.C.), the Chutzpah Festival (Vancouver, B.C.), the 2009 Femfest (Winnipeg, MB) and the 2011 Oh Solo Mio Festival (London, ON). In January 2013, Pitch Blonde was one of the top grossing shows featured at Toronto’s Next Stage Theatre Festival. This past May, Laura was invited to speak at the Canadian Association for Theatre Research Conference at Brock University. She was part of a panel discussion entitled, Performing Public Lives: Exploring the Borders of History and Identity in New Canadian Work.

In 2013, Laura debuted her newest solo show The Homemaker at the 2013 Wakefield TaDa Festival of New Works, and premiered the show in Toronto at the 25th Annual Toronto Fringe Festival. Now Magazine listed her as one of the top 10 artists to watch at the Toronto Fringe. In addition, this past April Laura remounted this new play in Toronto at the Storefront Theatre, and preformed in Regina, SK as part of Hectik Theatre’s Annual Season.